My lectionary readings today have me in Ezekiel 2, and Romans 1. Oy.

It seems clear that interest in God is declining in the Western world. This, of course, saddens me, because there is nothing but blessing to be found in coming to the Father through Christ, and being filled with the Holy Spirit. God is nothing but good, and living our lives in re-connection with this good God is, well, fantastic. The church is called to proclaim this opportunity to the world. But the world doesn’t receive it. Instead, they often lash back at the church, calling us ignorant, superstitious, killjoys, and even evil.

Why are people so bent against a revelation from God that is such good news? This still surprises me. 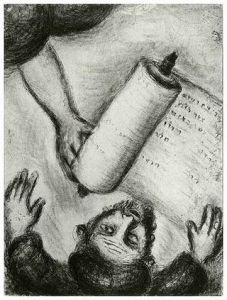 The word of the Lord has come to Ezekiel in chapter 1. After falling on his face before a heavenly vision of the glory of God, Ezekiel is lifted to his feet in chapter 2, and commissioned to proclaim God’s truths to the house of Israel. “The descendants are impudent and stubborn…whether they hear or refuse to hear, they will know that a prophet has been among them…the house of Israel will not be willing to listen to you, for they are not willing to listen to me; because all the house of Israel have a hard forehead and stubborn heart.” After this warning, it should be no surprise that the people will reject the revealed truths of God.

The Apostle Paul teaches in Romans 1 that man can know, honor and thank God, but instead “they became futile in their thinking, and their foolish hearts were darkened…they became fools…they exchanged the truth about God for a lie.” Therefore, “God gave them up” to their lusts, and to debased thinking.

Since Eve passed the fruit to Adam, our world has been broken and bent. There is still glory to be seen everywhere you look. There is still godliness being experienced in the lives of those who believe. But, apart from God’s activity of grace, the brokenness remains imbedded in the “hard foreheads” and “stubborn hearts” of our race.

In short – we’re called to proclaim the good news of God in Christ. But we should have no expectation that people will buy it. Quite the opposite – it should not only not surprise us when we’re mocked and rejected…it should actually boost our faith in the Word of God, which promises this very result.

Posted by Evangelical Orphan on January 8, 2015 in Discipleship

“…and ever o’er its Babel sounds…”

A nice word for the 8th Day of Christmastide:

“No one would have expected that the One whose fingers could stop the turning of Arcturus would be smaller than the head of an ox; that He who could hurl the ball of fire into the heavens would one day be warmed by the breath of beasts; that He who could make a canopy of stars would be shielded from a stormy sky by the roof of a stable; or that He who made the earth as His future home would be homeless at home. No one would have expected to find Divinity in such a condition…the World has always sought Divinity in the power of a Babel, but never in the weakness of a Bethlehem.”

Posted by Evangelical Orphan on January 2, 2015 in 12 Days of Christmastide