Ancient Paths: A Diversion to the Jordan

In our look at the “ancient paths” of the people of God, I continue to be struck by the way God has always used very physical means by which to manifest Himself to the world. This modus operandi of God stands in sharp contrast to our modern, “enlightened” expectations of how we think God is obliged to act.

In what we historically call the Modern world — the era spawned out of the European Renaissance, fanned into flame by Humanism, metastasizing into what we call the Enlightenment, and bearing the fruit of the scientific revolution — we have become enamored with that which we can measure. Through measurable experimentation we

have come to “conclude” that things happen according to what we call “natural laws”. This consistency — this sameness that we find in the created order, we chalk up to being “natural”, and therefore no longer in need of divine impetus or explanation. “If God is going to reveal Himself”, we now say, “it has to be through some sort of super-natural expression.” A burning in the bosom. A miracle. A still, small voice. Still, by modern definitions, none of these things can be counted on as genuine “truth”, because they are immeasurable. Spiritual experience is, by modern definition, doubtful.

All this stand in stark contrast to the Biblical testimony of the Apostle Paul, who says in Romans 1:20 , “Since the creation of the world God’s invisible qualities—his eternal power and divine nature—have been clearly seen, being understood from what has been made.” But, because we can measure things, we have become blind to the revelation of God as God, choosing instead to give the glory for created order to Mother Nature, a big bang, or (dare I say) a super-natural capacity for creation to rise above its clearly measurable bent toward entropy and atrophy to evolve through heredity and selection.

Okay, back to the River Jordan. I’ve been spell-bound (now there’s a supernatural term for you!) by the stuff-ness of the first chapters of the book of Joshua. Here, we have an estimated two million people who are about to enter the pro 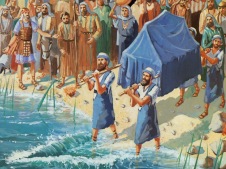 mised land near Jericho. Manna is falling daily from the sky. The Ark of the Covenant is in tow. A red piece of cloth is signaling salvation for Rahab and her family. The waters of the flooded Jordan are brought to a standstill when the feet of the Ark-carriers hit the water. God is commanding that stones be gathered and stacked as lasting remembrances. A mass circumcision is performed at God’s urging. Passover is celebrated, including the eating of the prescribed unleavened bread. There is the very real, physical encounter between Joshua and “the commander of the Lord’s army”, where Joshua is told to remove his sandals, because the ground is holy. Then, when it’s time to take Jericho, God specifically calls for marching, the Ark, seven priests, seven ram’s horn trumpets (with a specific prolonged blast), and a prescribed shout.

The (by now obvious) point I’m making is this: For Joshua and the Israelites, their ongoing relationship with God was wildly physical. Inescapably tangible. Any notion that one’s spiritual life was relegated to internal feelings or convictions is completely 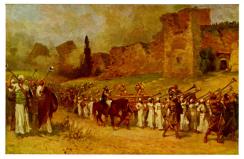 absent from these descriptions. Rather, God unfolds His covenant with His people in ways that “all the peoples of the earth may know that the LORD’s hand is mighty, and so that you may always fear the LORD your God” (Josh. 4:24). Through these tangible means, God says, “Today I have rolled away the disgrace of Egypt from you” (Josh 5:9). They all knew that they were now “crossing the plains of Jericho in the LORD’s presence” (Josh. 4:13). God, present, forgiving, proclaiming … through stuff.

Most of us would count scientific progress a great blessing. But the undergirding values of our age which have allowed for great advance have profoundly victimized our faith. They have served to emasculate God in the hearts and minds of the “enlightened”. We now find ourselves the product of a worldview that severs the natural from the divine, honors the former while doubting (and then ignoring) the latter, and is hopelessly preoccupied by our own measuring. With no vision for how the creator makes Himself known to the people of His creation through the stuff of His creation … we have become, not enlightened, but blind. We have “exchanged the truth of God for a lie, worshiping and serving what has been created instead of the Creator” (Rom. 1:25).

This is also why we have such a hard time embracing the Ancient Paths of the sacraments. Our modern minds can’t calculate how God could have covenanted with His people through stuff — the water of baptism, the bread and wine of the Eucharist, the Church as His body. Imagine the proto-gnostic of Joshua’s day, saying God isn’t really manifesting himself in physical ways, because “it’s the thought that counts.” That person would stand condemned. Meanwhile, today, especially in Evangelical circles, we reduce our spirituality to mental ascent and inner conviction. In our quest to not worship creation, we have exiled creation from our spiritual lives, and have lost His means for manifesting Himself to us — and to the world.

The recovery of the Ancient Paths of the sacraments is so much more than a stray piece of adiaphora. It is human obedience at its core. It is our collective return to all that God is and does. It is fullness of life in the Promised Land.

“Ask For the Ancient Paths”

“This is what the Lord says: ‘Stand by the roadways and look. Ask about the ancient paths, “Which is the way to what is good?” Then take it and find rest for yourselves.‘” (Jeremiah 6:16).

My own personal journey has led me down ancient paths. Over 30 years ago, I was gripped by a love and desire for the experience of the ancient, early church. I have always wanted to be a part of a contemporary Christian tradition that has beaten a consistent path from the first century to the present … and would most fully connect me to the early church, both in word and practice. The journey has led me to the classical Christianity ensconced in Lutheranism (particularly in the Lutheran Church – Missouri Synod). I have chosen to take this path … and have found rest for myself. I recommend it without reservation.

This week our church* is beginning a 9-week preaching series called Ask For the Ancient Paths. It is a study of the six chief parts of Martin Luther’s Small Catechism: the Creed, the Ten Commandments, the Lord’s Prayer, the Lord’s Supper, Baptism, and Confession/Absolution. This series provides an ideal time for me to share some of my journey as it relates to the foundational teachings of classical Christianity as put forth in the Lutheran Catechism.

Feel free to engage with your questions, comments and critiques. “One who listens to life-giving rebukes will be at home among the wise. Anyone who ignores discipline despises himself, but whoever listens to correction acquires good sense” (Prov. 15:31-32). Good sense, wise company, life! My journey continues. I hope yours will, too.

So, grab your hat, your sun-screen, your walking stick … let’s explore this ancient path together.