(For those of you who have been following along through this whole Advent blog … are you starting to find yourself longing for some grace?!? I sure am. I suppose that’s a good place for the soul to be during Advent…)

Today I’m amazed at just how stubborn and misinformed we can be when it comes to God.

In vs. 9-10, we have this grizzly prophetic anecdote. Because of the judgment of God on their sins, an entire household of ten will be found dead in their house. An uncle will come by to do his duty of cremating the bodies. While searching for bodies and carrying out his task, he will say, “Shhhh! We must not mention the name of the Lord!”

Why would anyone want to be careful not to mention the name of the Lord?

Perhaps this uncle is in denial. He is stubbornly refusing to believe that what has happened has anything to do with God. Despite the tragedy, he still doesn’t give God his attention.

Or maybe it’s the opposite: Perhaps he knows the LORD is behind the destruction, and he doesn’t want God’s wrath to be kindled any more than it already has been. God has his attention … but his response is misguided.

Our increasingly secular nation seems to be quoting this Samarian uncle these days. “Shhhh! We must not even mention the name of the Lord.” Do they say this because they stubbornly-yet-genuinely refuse to believe in God’s existence? Or might they, deep down, hold to some semblance of belief, and hate the mention of God because it reminds them that a day of reckoning is coming?

Either way, it is pathetic. Though God shows Himself strong all around us, let’s seal our mouths, plug our ears, and burn the bodies. Our godless world, at its most ignoble.

What’s wrong at the root is the theology behind the “shhhh.”

God is nothing but good! He created an amazingly beautiful world. Her provides for us miraculously every day. He has saved us time and again (g
arden, flood, exodus, conquest, battles, returns from exile, and ultimately in Jesus). He speaks to us through his prophets. His people
have brought countless practical blessings to the world. And the good news, that God loves, forgives, blesses, empowers and makes alive, continues to take hold of people all over the world, filling them with “inexpressible and glorious joy” (1 Pet. 1:8). That is God! And that is grace! Why would you want to “shhhh” that?

Well, ignoring God doesn’t make Him go away. Israel’s godless insistence on injustice, unrighteousness and self-confidence will result in their being “shattered to pieces.”

Advent. A time of proclamation. Don’t let the “shhhh” keep you from calling out to Him, and proclaiming His return.

One of the reasons we don’t look forward to Jesus’ coming as much is we should is, because … well, it’s hard to believe. It would be an absolute miracle, and people just don’t believe in miracles these days.

For the past 500+ years, the Renaissance, Enlightenment and Scientific Revolution have led us to a naturalistic view of the world: Real truth, natural truth, is determined by scientific experimentation. Miracles don’t mix with this naturalistic approach – hence the term “supernatural.” The backlash of this new rational order is to cast those who believe in the supernatural as superstitious, backward and irrational. If there’s one doctrine we get mocked about more than any, it’s the idea that Jesus is going to come back and make everything right.

What does this have to do with Amos 4?

In these verses, Amos makes a list of disasters that had befallen Israel: Famine (v.6), drought (v.7-8), crop disease (v.9a), infestation (v 9b), and pestilence (v.10a). These kinds of events are happening all

over our world right now. But, for the most part, the intelligent people of the western world have disassociated these things from God. Instead, we call them “natural disasters”.

Amos also describes wars (v.10b-11). We don’t call these “natural” disasters, but we still don’t attribute these to God. These are our issues as humans. We’re the sovereign creators of our own hostilities. So, neither wars nor natural disasters seem to make us think much about God.

God, Amos, and the ancients, didn’t see it like this. God makes it clear that there are no natural disasters. They are God-disasters. “I gave you … I also withheld … I would send … I struck you … I laid waste … I sent … I killed … I carried away … I overthrew.” God is the agent of all of these acts, and He is incredibly disappointed that the Israelites don’t see that. He’s trying to get their attention! But, four times God marvels that “yet they did not return to me” (v. 6,8,9,10,11).

The result of this callous numbness to the divine initiative? “Prepare to meet your God, O Israel.” They had forgotten Him. And they’re about to get re-introduced to “the one who forms the mountains, creates the wind, reveals his thoughts to mortals, makes the morning darkness, and treads on the heights of the earth – the Lord, the God of hosts, is his name!” (v.13).

So, our naturalistic bent has turned our attentiveness to divine revelation on its head. A Biblically appropriate reaction t

o tragedy should be: “This terrible thing is happening – God must be real, and is getting our attention!” Instead, our unbelieving world says: “Because this thing is happening, there must not be a God, because He wouldn’t ‘let’ this happen if He existed.” The louder God screams, the harder our hearts and minds become.
So many in our modern world don’t believe God exists. But this isn’t as new as we think. It has been the case for millennia. Don’t worry! God isn’t losing sleep because of people’s disbelief. He continues to be God. He listens. He speaks. He brings down, and lifts up. He’s in control. And He isn’t moved by His approval ratings.

What He has done is promise to return. So, during this Advent season, as we look around at all the craziness and tragedy in our world, don’t be duped by your culturally-derived propensity to be a naturalist. Let the living God get your attention! Return to Him. Prepare to meet Him. 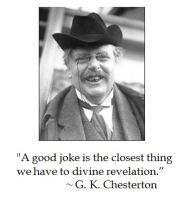 “He said something about everything and he said it better than anyone else.”

Gilbert Keith Chesterton, who is commonly and most often referred to as G. K. Chesterton, was born in 1874 and lived until 1936. He would go down as one of the best writers in the 20th Century.

He was born in London and educated at St. Paul’s. Surprisingly, Chesterton never attended college, but went to art school instead. He began writing when, as an art student, he was asked to contribute a few articles to an art magazine where he critiqued some new pieces. From those humble beginnings, Chesterton would go on to write over 100 of his own books, while contributing to over 200 more. He also wrote hundreds of poems, five plays, five novels, nearly 200 short stories. Chesterton, who considered himself more of a journalist than a writer, also wrote weekly columns for 43 years of his life. Few in history have been such prolific authors…and he didn’t start publishing until 1900.

Chesterton had a spouse who anchored his personality, writing, lifestyle, diet, and many other things. His wife, Frances, seems to have single-handedly kept G. K. on track with his personal schedule. One letter even has Chesterton writing to his wife about where he was, and asking her where he ought to be instead.

He was as amazing a character as any of his fictional creations. G. K. was over six feet tall, and weighed nearly 300 pounds. He wore a cape and a crumpled top hat. Almost every picture that exists of G. K. has him sporting a mustache and glasses. He

would commonly walk with a cane, and nearly always kept a cigar in his mouth. He was incredibly large, loud and friendly, often was bellowing out laughs through his cigar and mustache.

Chesterton continues to have the same type of impact on his world as he did with his contemporaries. For example, C.S. Lewis, who was a staunch atheist, was brought to faith through the reading of Chesterton’s little book The Everlasting Man. Another example has a man living in British-ruled India, who became inspired by a Chesteron writing, and through it was led to start a movement, which eventually ended British rule in India The man: Mohandas Gandhi. And if these accounts are not amazing enough, one can simply read the praises that came from other intellectuals of his day: George Bernard Shaw, H.G. Wells, Bertrand Russell, Ernest Hemingway, T.S. Elliot,Dorothy Sayers, and H. G. Welles. Shaw, who had a friendly rivalry with G. K., once described him as “a man of colossal genius”. Elliot affirmed that “Chesterton deserves a permanent claim on our loyalty.”

Perhaps you’re wondering, “why have I not heard much of this Chesterton figure?” One reason may be that he has always been hard to label – either as a man of faith, or a politician. Another may be that he often put forth challenging ideas about controversial topics. For example, Chesterton is famous for arguing the cause of the common man. He was fond of defending the poor, and the family. Chesterton, always a lover of the arts, would also write often of the beauty he found in things that society would not find so beautiful. He defended Christian thought and morals in a day of growting secularism, and championed the Roman Catholic faith in the land of the Church of England. He also wrote regularly against such

things as materialism, scientific determinism, moral relativism, and agnosticism. Since all of these have grown stronger since his day, it makes sense that G. K. and his arguments may have lost favor over the years.

Where does Chesterton fit in the narrative of Church history?

Chesterton began his faith journey in the High Anglican Church. We can certainly be pleased with his role in the conversion of C. S. Lewis. But, well beyond that single instance, Chesterton was publicly bold in his defense of Christian thought. Chesterton began his faith journey in the High Anglican Church, but ultimately converted to Roman Catholicism. But, he preferred to be called “orthodox” (His most widely read book to this day is Orthodoxy, in which Chesterton defends “orthodox” Christian views). From this platform of defending a traditional Christian understanding of truth, Chesteron would argue against the pride and willfulness of modernistic thought. For example, he stated that “the worship of will is the negation of will”. When one lifts up one’s own will as supreme, then one must respond to another’s will with a like deference, saying “do as you will”. This means that “I have no will in the matter” of another — meaning one’s will is acutally negated, and doesn’t matter.

He also defended Christian ideals like fighting for a Biblical anthropology. A popular topic in London during his time was eugenics. Eugenics proposed the termination or sterilization of people with limited mental capacity. Also, leading thinkers in London had begun to think of the poor as a race of people that had failed to produce good offspring. Chesterton was vehemently opposed to these ideas, writing books, essays, and poems in defense of those who were challenged mentally and economically.

G. K. also wove himself into Christian history through his work as a biographer. In his personal study of Thomas Aquinas, Chesterton skimmed through one book … and then penned what is perhaps the greatest biography written on the man.

As for his conversion to Catholicism, Chesterton’s main reason was the church’s catholicity: He very much enjoyed being a part of something that felt bigger than him, and his country, and his century. Chesterton didn’t consider himself a child of his age, but instead a product of the truths and traditions that had survived the centuries before him.

As for this sort of thinking, who can blame him?